The Dreaded Slice – By Michael Long

We all like a slice of pizza. Followed by a slice of cake. But on the golf course a slice is usually not on the menu.

But why do we slice?

Most golfers struggle with this shot and it evokes a range of emotions from dismay to total frustration. I believe the only other shot in golf that causes golfers more angst is the shank.

But do you really understand what causes a slice? We all know that when hitting a slice the ball moves a long way from left to right (opposite if left-handed) and sometimes there isn’t a fairway wide enough to keep your ball in play. You start aiming further left which means one of two things: you clip the trees on the left side 50 metres off the tee or you end up in the trees or out of bounds on the right. Neither are desired outcomes. Well-meaning advice or thoughts to fix this problem can be “keeping the head down” or “keep the left arm straight” or “bend the knees” or “close the clubface”. That advice rarely helps and all you end up doing is aiming further and further left.

There are two factors that act in unison to cause a slice. 1. The swing path of the club and 2. The direction the clubface is pointing at impact (face angle). An out of control slice is when the relationship between these two factors are out of sync. The impact position of the clubface and the swing path will determine how much left to right, or clockwise spin, is transferred to the ball.

In an effort to control the slice you are more than likely aiming further left. This means that you will have created an out to in swing path and, depending on the direction of the clubface at impact, you now have three scenarios. See the diagram below. 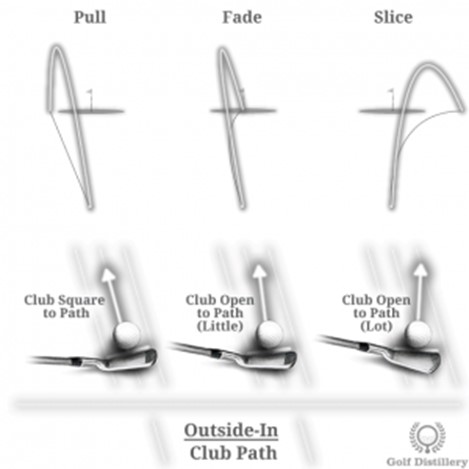 1. An out to in swing path + a clubface square to the swing path produces very little clockwise spin on the ball and will produce a shot that travels to the left of the target.

2. An outside to in swing path + a clubface that is slightly open to the swing path will produce a little more spin on the ball that ends up being a controlled fade.

3. An outside to in swing path + a clubface that is a long way open relative to the swing path will result in a lot of clockwise spin being imparted onto the ball and now you have a shot that will slice a long way off target.

I remember once, when playing a European Tour event, I overheard the pro I was playing with ask his caddy if he should play a provisional ball after a particularly wild slice. The caddy responded, “you could have wrapped bacon around that ball and Lassie wouldn’t find it”. Ouch! Probably best that I didn’t mention that a wild slice is a mismatch of clubface and club path.

What are you options to fixing a slice? They are twofold:

A stance that has gradually become more and more open due to missing shots to the right will only mean that the swing path is now too far to the left and not matching the clubface at impact. Even if you have a perfect grip.

A ball position that is too far forward could be causing your shoulders to be open at impact enhancing an outside to in swing path that doesn’t match your clubface.

As you can see, fixing a slice doesn’t require a complete rebuild of the swing. It can be as simple as getting back to basics. At michaellonggolf.com I can help you understand which swing variable needs working on and introduce some drills and techniques that you can use in your practice to develop the right feel that will help to correct the dreaded slice.

Trying to fix a slice?  book a golf lesson here with Michael Long.

Back to previous page